IRONTURF for Reno’s Wolf Pack at the University of Nevada

TenCate Grass is honored to announce its first IRONTURF installation in Nevada for the University of Nevada, Reno at their historic Mackay Stadium, home of the Wolf Pack.

Mackay Stadium opened in 1966 and has undergone several renovations, the most recent of which is the installation of the world’s highest-performing synthetic turf. IRONTURF is engineered specifically for high-impact sports, like football, and offers unmatched playability, durability and safety through its woven construction and the use of Tencate Grass’s superior XPS slit-film and diamond monofilament fibers.

“As a high-caliber DI football program, the University of Nevada, Reno demands the highest-caliber turf,” said Troy Squires, Vice President of Business Development for Tencate Grass Americas. “IRONTURF offers them a surface that will not only hold up to the toughest gameday action, but provide their players with a consistent, safe playing surface for years to come. We are proud to have IRONTURF be the Wolf Pack’s home turf.”

Since its introduction in 2017, IRONTURF is sweeping the nation and has become the turf of choice for the country’s most demanding sports venues, with installations for the New England Patriots, Sporting Kansas City and many colleges across the USA, including for other DI programs like Baylor University and the University of Northern Colorado.

About IRONTURF
GreenFields’ game-changing IRONTURF technology is revolutionizing the turf industry. Engineered specifically for football and other high-impact sports, IRONTURF provides unmatched playability, durability and safety—all without sacrificing a high-quality look and feel. IRONTURF is a 50/50 woven blend of the toughest TenCate fibers — durable XP and playable Diamond. The unique interlocked fibers create a surface that stands up to the nation’s toughest sports. Learn more about IRONTURF at www.ironturf.com. 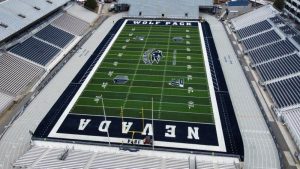